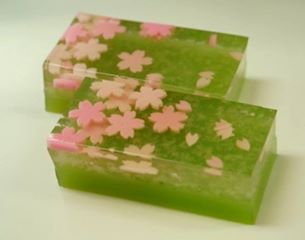 This includes various types of desserts, vagasis, Mitarashi rice balls, cold and baked cakes.  Very often, sweet in Japan is not at all sweet in taste – they can be completely bland, salty, and even bitter!

DAY OF JAPANESE CANDY, in Japanese this day is called Wagashi no hi.  His appearance on the calendar on June 16 is associated with a real historical fact.

In 848, during the Heian era, an epidemic raged in the country, and on 16 June the emperor of the Land of the Rising Sun gathered sixteen sweets (wagashi were the privilege of the upper classes of Japanese society at that time) and made an offering to the Gods, asking them to give health to the people of the country.

Vagasi – “Ba” literally means “Japanese”, and “extinguish” – “sweets”, having passed a long historical path of development, are today a true work of art.  And today, traditional Japanese sweets are prepared with the hands of the same natural ingredients as many years ago.

Vagasi is a beautiful reminder of the changing seasons.

So in the rainy season they serve the colors of the hydrangea, and in winter, confectioners dress vagasis in caramel imitating snow.

In spring rice cakes are wrapped in cherry leaves.

In the fall, sweets are served in the form of bright persimmon, or ginkgo leaf.

There are desserts that you can try in Japan regardless of the season or the date you visit the country.  However, the vast majority of sweet delicacies appear in tea and coffee houses of the country on certain dates – jelly and desserts with sakura flowers (seasonal flowers of Japanese cherry are collected and preserved with salt, and then used as decoration for desserts during the flowering season), as a rule, served in  Japanese cherry blossoms bloom from March to May, and lavender-flavored ice cream – when luxurious lavender fields bloom in Hokkaido.

Each delicacy is served on dishes corresponding to the current season of the year – in the spring it will be delicate pastel colors, in the summer – bright rich colors, in the fall – brownish-purple shades of foliage and earth …

Depending on the weather conditions, the dishes for the traditional dessert are also selected.  Hot Japanese summer is “chilled” glass or porcelain tableware, and in winter preference is given to “warm” materials, such as ceramics.

The aesthetic value of the vagasi is enormous – it is a multi-layered dessert, in which dough and filling of different colors, tastes and textures are successively sealed.  The texture also matters – one layer can be more crunchy or viscous, soft or hard. they are less sweet than European sweets, and are made from natural ingredients: rice, sweet potatoes, agar-agar (vegetable gelatin), chestnut, legumes, herbs and fruits.  For a good green tea, which, of course, drink unsweetened, Japanese sweets are just perfect.

Serve vagasi with green tea.  Cultural traditions of the tea ceremony are such that dessert should not interrupt the taste and aroma of tea.

This beautiful dessert you need to see and be sure to try..

Do not use butter, milk, eggs.  Natural sweetness of vagasi can be emphasized by corn or maple syrup, a small amount of sugar.

Due to the completely natural composition, they contain vitamins, trace elements and fiber, and their caloric content is much lower than European desserts.

Anko is a concentrated blend of adzuki beans, sugar and water.

Mochi is a very important component, it is present in all traditional vagasis.  The texture of the mochi is dense, stingy.  As such, it cannot be made at home, so the Japanese often buy sweets in stores or buy ready-made mochi paste.  But there is a mild alternative to mochi – it is guhu, or a mixture of rice flour and rice. Mochi is not only a component, but also a dessert.  The most common and popular type of vagasi, there are more than 15 options.  Classic mochi colors are white, pale green (green tea) or pale pink.  Mochi colors correspond to the season: pink at the time of sakura blossom, orange and gold in October. The most popular varieties are: Daifuku are round balls of rice mass with ancho filling, which can be served simply, can be fried in kinako soy flour.

Daifuku is a mochi made of guhu with a sweet filling, traditionally strawberries or strawberries.

Yomogi daifuku is a mixture of starch from Japanese tansy Yomogi, Gyuhi, filled with Anko.

Botamoti is the “homemade” version of mochi: Anko pasta stuffed with motigome rice.  Botamoti exist from the 13th century.  They are traditionally prepared on the days of the Spring and Autumn Equinox, when the Japanese honor their departed relatives.  But they are no less popular on other days.

Sakuramoti is either pancakes or pink rice stuffed with ancho wrapped in pickled sakura leaf.

Dango is a sweet, chewy rice dumpling on a skewer.  They are mega-popular as street food.

This is also mochi, but without filling.  Dango varieties are more than 10. Most popular: Mitarasi-Dango is watered with sweet soy sauce, fried over an open fire;  kusa-dango — a mixture of rice and yomogi;  dango hanami – tricolor dumplings Castella is a simple biscuit that has become a favorite in Japan since the 16th century, when the Portuguese brought it to the country.  Prepared on the basis of sugar, flour, eggs and starch syrup.. Dorayaki are small fluffy pancake-based pancakes.  Put together ancho paste, whipped cream, ice cream or chestnuts.  They are also called Mikas, because they resemble the soft slopes of Mikasa Mountain.  Dorayaki is easy to find in supermarkets and small shops, it is a popular street food. And again mochi balls, but this time with ice cream filling.  They are made from a soft version of mochi, covered with corn starch or sweet rice flour to make them less sticky when the ice cream melts.  The ice cream was developed by the company “Lotte” in 1981 and is released under the name “Yukimi Daifuku”. The Japanese love “matcha” powdered green tea and use it everywhere – from the traditional Japanese tea ceremony to the additions to cosmetics.  Naturally, the match could not get into the Japanese sweets, such as vagasi and ice cream.  I am also a fan of the taste of tea match – it is tart, with a slight bitterness and perfectly quenches thirst.  From it turns out refined ice cream which became not only a popular dessert, but also excellent rescue on a hot day.  And Japanese doctors say that “tea ice cream” is a powerful source of antioxidants and tonic agents.  The highest quality matcha tea grows according to the Japanese in Shizuoka Prefecture. is a Japanese hit that has become world famous:

Oh, and this is a very special ice cream!  The fantasy of the Japanese, their natural ingenuity and craving for beauty – on the one hand, practicality and love for healthy, high-quality food – on the other hand gave rise to such a tasty and unusual type of dessert.  This amazing ice cream bun or ice cream pudding, as a rule, consists of high-quality ice cream or rice fermented ice cream wrapped in rice dough.  Due to the rice shell, ice cream gets its unique sound and allows you to eat dessert directly with your hands, cutting it with a special dessert knife.  The flavors of the filling can be the most incredible, but the sweetness of ice cream is perfectly extinguished by rice dough and its leanness. – reminds assorted.  It is made from ancho paste, jelly based on agar-agar, mochi, chestnuts, sweet beans, fruits, poured over with sweet black syrup.  There is no standard recipe, the main thing is to have anko and jelly on agar-agar.  It is served in one deep plate, with or without ice cream. – Chinese style Wagashi: steamed bun made of wheat, rice or buckwheat flour with ancho filling with sugar.  The classics are complemented with a variety of fillings and dough, and the buns themselves are deep-fried.  Manju came to Japan back in 1341 and fell in love with the simplicity of preparation. are the most decorative vagasis.  They are used for the Japanese tea ceremony, special holidays, served in more expensive restaurants.  Each namagasi is a small work of art depicting flora or fauna.  And every Japanese woman is trying to make beautiful namagasi for her family. is an unusual Japanese jelly made from bean paste, agar-agar or arrowroot (a special starch flour giving transparency), sugar and water.  To the base add a variety of natural dyes, chestnuts, sweet potatoes. – this is monaka – a mixture of rice flour and water, which is heated, kneaded, rolled and baked.  Buns with crispy crust are obtained, which are cut in half, stuffed with bean paste and not only!!

Japanese sweets yatsuhashi, perhaps the most popular sweet, which brings every third tourist from Japan.  These are triangles of unbaked rice dough with cinnamon.  The most traditional filling for yatsuhashi is sweet azuki beans, black sesame seeds – Kalindzhi and match green powder tea familiar to us, a match ..

Have you ever tried fried dolls?  In Japan, you will have this opportunity – this is how the name of another popular Japanese sweetness is translated – ningyo-yaki cookies.  What kind of molds do not have this cookie!  But traditionally, these are pupae (this is where such a strange name comes from – cookies take their name from Tokyo’s puppet masters’ area), as well as fish, birds, flowers, and even temple themes take place in such cookies.  The dough is not as sweet as on our biscuits, but inside there is a sweet adzuki bean paste.

We bring to Your attention: